PRAGUE, CZECH REPUBLIC (BosNewsLife)–  The European Union and dozens of countries have pledged to speed up social support for Holocaust survivors and the search for art and other items that were stolen during World War II by the Nazis.

At a meeting in Prague, they agreed to establish a special European institute to deal with these issues and education.  StefanAs the number of survivors of the Nazi Holocaust rapidly declines,there was a sense of urgency among delegates that the world must provide them with adequate social assistance and compensation for stolen goods.

The five-day meeting — attended by Holocaust survivors, members of Jewish organizations and delegates from nearly 50 nations — was a follow-up to a conference more than a decade ago in Washington that led to agreements on recovering art looted by the Nazis.

Nobel Peace Prize laureate and Holocaust survivor Elie Wiesel told the gathering that it is a moral duty to provide thousands of victims of Nazi persecution living in poverty at least some comfort in their final days.”It is not easy to measure human suffering.  How much was my grandmother’s candle stick?  How much? And they took it,” he recalled with his soft spoken voice.

” They needed it for the war?  Think of every individual who lost whatever poverty he or she had.  And when you think of them, you realize that whatever we do is so late.  But we cannot wait another day, not another hour.”

Soon after, Naftali Herstik, the Chief Cantor of The Jerusalem Great Synagogue, tried to comfort Holocaust survivors who attended the emotionally charged meeting with solemn songs and with words from the Prophet Jeremiah.

Herstik recalled the six million Jews who perished at the hands of Adolf Hitler’s followers, who also seized billions of dollars of gold and art as well as private and communal property across Europe.

Later, a declaration was approved by the national delegates in attendance, saying that they are aware that Holocaust survivors and other victims of Nazi Germany have reached advanced age and that meeting their social welfare needs must be a priority.

The European Union’s executive branch, the European Commission, and the outgoing Czech-E.U. presidency, also pledged support for “more effective” Holocaust education and research across Europe, and the preservation of memorials in former concentration camps, cemeteries and “other sites of memory”.

The head of the American delegation, former U.S. Deputy Treasury Secretary Stuart Eizenstat, told reporters he believes that progress will be made.

“Of all the conferences, this is by far the most ambitious — covering the widest array of issues, including those never considered before by previous conferences, like the desperate need of survivors, many of whom live, even in the United States of America, in abject poverty, and issues like compensation, private property and [war loot] recovery,” he said. 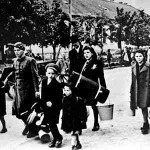 But Eizenstat cautioned that, among other items, the Nazis stole or forced the sale of at least  600,000 paintings of whom at least 100,000 remain unrecovered.

All of the country delegates attending the conference backed the foundation of an institute to track the return of Jewish art and property stolen by the Nazis.

Czech Minister for European Affairs Stefan Fule said the European Shoah Legacy Institute would be based in the Czech town of Terezin, the site of a former Nazi concentration camp.”The Institute should serve as a voluntary forum for promoting developments in the areas covered by the conference, especially educational and social programs.”

Former U.S. Secretary of State Madeleine Albright, who was born in what was Czechoslovakia, welcomed the initiative and plans by conference delegates to visit the former camp in Terezin on Tuesday, June 30, at the end of the gathering.

“I have to say that I especially am deeply moved that you are all going to go to Terezin.  That is part of my history that I only learned recently and my family’s association,” she said.

Several of Albright’s Jewish relatives perished at the hands of the Nazis during World War II.

Wiesel urged the delegates to continue to renew their faith in justice and truth, amid the wounds of the Jewish people’s troubled recent history. “If you want to find a spark, look for it in the ashes,” the Holocaust survivor said. “Look for truth and justice in the ashes, but also in your own heart…” (Parts of this BosNewsLife News story also airs via the Voice of America (VOA) network).

Fears Over Christian Refugees in Hungary As U.S. Network Returns

You're battling a defeated enemy!
Come and see!
You've Been Freed to Worship!
Mercy Triumphs Over Judgment!
Pass through the drill!

ABOUT US
Breaking the News for Compassionate Professionals.
Contact us: news@bosnewslife.com
FOLLOW US
© © BosNewsLife | All rights reserved | Sitemap